The first fourteen years of Erin’s life are punctuated by memories of fear, panic, desperate attempts to make her “normal,” long nights of crying out to God for miracles.

There are good memories of those years, too. Her smile when she finally, finally learned to skip after trying for much longer than other children (she taught herself one leg at a time, and we all celebrated with her when she accomplished this). The unconditional love that she poured out on us and everyone else she met. Her dearly beloved “Glo-Bug.” Watching her learn to ride a horse, groom him, and jump him in competitions.

Learning to ride Doughboy, one of her favorite horses at the stable where she took therapeutic riding lessons

Erin, about 7 years old, trying to read to her younger brother

But the majority of those years for me were about making sure I left no stone unturned as I searched for answers about how to teach her to crawl, to walk, to talk (eleven years of speech therapy); how to help her learn to read; how to get her through school emotionally intact in spite of bullies (we ultimately chose to homeschool and this protected her from the bullies, allowed her battered heart to heal, and finally made it possible for her to learn to read); how to make sure she would eventually have the life that every parent dreams of for their child.

Then… that day in the neuro-psychologist’s office here in Cincinnati as he discussed the results of her developmental testing. She was fourteen. In spite of all my efforts, there were still such huge gaps. I knew that I was running out of time to “make her ready” to live the life I had all planned out for her.

So we decided to have this full battery of testing completed, hoping that this doctor could give us the magic combination of treatments, tools, tricks that would “fix” her.

It was so agonizing to see her struggle through those tests, aimed at the very core of her many weaknesses. I remember the searing pain in my heart as I watched her self-esteem shrink before my eyes while she tried to squeeze every drop of potential from her brain during those hours of evaluation, fully aware of the fact that she was getting many of the answers wrong.

And in the end, Scott and I sat in this doctor’s office and he shattered every dream I had ever had for my baby girl when he said to us, “It’s time for you to prepare yourselves for the probability that your daughter will never live independently.”

Oh, dear God. How could this be true? Had I not worked hard enough? Was there some new secret cure I had somehow overlooked as we dragged her around the country for many, many different kinds of tests and treatments? What had I done wrong? How had I failed her?

The grieving process that followed the news that day was almost unbearable. I thought I might never take a full breath again.

And as we sat Erin down to talk through this with her and try to help her realistically face this “new” future, my very soul was ripped to shreds as she started down her own path of grief.

Unlike Kathryn who lives blissfully in a world of innocence with no understanding of just how different she is from other children her age, Erin understood what this meant. Although not concretely, she somehow grasped that she was now facing a lifetime of watching younger siblings and friends slowly outgrow her one by one. Dating, driver’s licenses, marriage, parenthood. . .  were all dreams that were no longer part of the story that we thought had been written for her.

As a bridesmaid in her sister’s Renaissance-style wedding

Scott and I were able to tell her with real confidence that whatever God had planned for her to do in her lifetime, He had given her everything she would need to accomplish that.

But it meant placing my own picture of her future into some kind of a crypt and burying it deep, deep somewhere, then turning my back and walking away. I knew I should never look back, but sometimes I did. And when I did, then I would stumble and have to repeat steps in the grieving process.

Oh so gradually, though, I was able to keep moving forward in this new direction and then finally to lift up my head and look around at this new world where we found ourselves.

I was surprised to find freedom! I had spent so much of those first fourteen years with my head down, looking for answers — had focused so passionately on the “broken” parts of my daughter — that I had missed so many beautiful things. She was funny; she loved and felt deeply, fully, completely; she was resourceful and oh, so hungry to learn; she had a servant’s heart that cared more for others than any human I had ever met. I was now free to just let Erin be the Erin God had created her to be. I no longer felt pressured to try and make her into some version of Erin that I thought she should be. She and I could both just relax, breathe deeply, rest, drink in life. I could step back and gaze on her beauty and just enjoy the gift of her.

I couldn’t go back and reclaim those fourteen years, although there were times when I longed to be able to. But I could move forward resolving not to miss any more beautiful moments as I watched God reveal all that He had packed inside this special daughter of mine, proving what we had told her — that He had given her every thing she needed to accomplish all that He had planned for her in this life.

Performing a song in sign language for the God she loves

She teaches me much about humility and patience as she works so hard to learn new tasks and commit to memory the steps for completing these tasks. She shames me as she serves this family tirelessly day after day, truly using her gifts to bless others, only occasionally stopping to think about, or feel sorry for, herself. I’m certain that she makes the angels themselves sing with joy as they witness her deep, deep love for her Savior and her genuine attempts and desire to walk in His ways.

Her whole world is made up of only one very small corner of the universe, but she fills that corner with blazing light as she lives out each day, doing the work God has given her to do in our home; pouring devoted love into the lives of her younger siblings and nieces and nephews; basking in their love and adoration for her.

Becoming an aunt — her nephew

God has taught me so much about Himself through this precious child of His as He has guided me through the process of surrendering my plans for her and watching in amazement as He daily fulfills his plans for her in His broken and needy world. 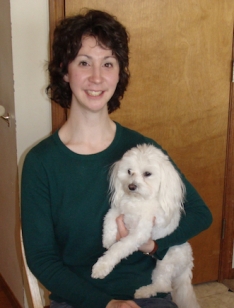 Erin with her dearly-loved companion, Teddy

Happy, happy birthday my dear Erin. I love you. I long to be like you in so many ways. I thank God for you. And don’t ever forget that it’s because of you — of exactly who you really are — that our home is now overflowing with beautiful gifts from God, brought to us from all corners of the world. Gifts who make our lives complete, enhance our ability to love, reflect the face of God. Thank you for so graciously, gracefully being just who God made you to be.